You are here:
Red Line Not only is Punchbowl crater among one of the oldest natural landmarks on O’ahu, it is also one of the most visited, right near the top of the list with Pearl Harbor, Diamond Head and Hanauma Bay. It also has a very checkered and fascinating history.

Punchbowl Crater was formed between 70,000 and 100,000 years ago as part of the secondary activity of what is referred to as the Honolulu Volcanic Series. It is classed as a volcanic tuff cone, the same as Diamond Head near Waikiki, with the crater being formed through the ejection of hot lava through cracks in what, way back then, were coral reefs.

What’s in a name?

While the reason for the English name is relatively self-explanatory, Punchbowl Crater’s Hawaiian name is Pūowaina. The closest translation to this word is “Hill of Sacrifice” which would make sense as the first recorded use of the crater was for human sacrifice and the sacrifice of those who violated the islanders’ many taboos. Fortunately, that is no longer the case as the practice died out over 200 years ago! Punchbowl Crater has long history and connection with the military

As far back as the reign of Kamahemameha the Great in the later half of the 1700s two canons were mounted on the rim of the crater to salute the arrival of important ships and also on special occasions. In the late 1800s the outer slopes of the crater were leased for settlements and by the 1930s the crater itself had become the site of a rifle range for the Hawaii National Guard.

Anti-aircraft guns were placed on the crater rim during the Second World War and were used during the Japanese attack on Pearl Harbor on Sunday December 7, 1941. It was after the end of the War that the crater also became a military cemetery, not only to commemorate those killed during the attack on Pearl Harbor, but also the many American soldiers who were killed on ‘nearby’ Guam. Eventually in excess of 13,000 soldiers and sailors who were killed during the Second World War were buried in the Punchbowl Crater in what is now known as the National Memorial Cemetery of the Pacific. In addition, the Honolulu Memorial at the National Memorial Cemetery includes the names of 28,788 military personnel listed as missing in action (MIA) or buried at sea in Pacific conflicts, including the Vietnam War, and each one is listed on one of the marble slabs in the ten Courts of the Missing. 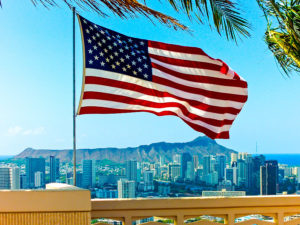 Japanese and Americans alike visit the Punchbowl crater to pay their respects to the fallen, but it would be a mistake and a shame not to also take in the beauty and magnificent setting of the crater. Then, of course, there is the stunning vista that awaits you when you reach the top of the crater’s slope. Other than from the top of other tuff cone craters on the island, nowhere else can you get breathtaking 360-degree panoramic views of O’ahu, Honolulu and the mystical Pacific Ocean.

How do you get to Punchbowl Crater?

Exploring O’ahu by car is not ideal as you will spend half your time looking for somewhere to park. Instead, using the Waikiki Trolley is the perfect way to explore, taking advantage of the unique hop-on, hop-off system for the Trolley’s three routes that run continuously throughout the day. To get to the Punchbowl Crater, hop on the Waikiki Trolley Red Line and the Punchbowl Crater stop, Number 6, is sandwiched between I’olani Palace and Chinatown. While it’s unfortunate that this stop is more of a “drive-by” (meaning no one aboard the trolley can disembark to explore the site), you can still see a lot while the trolley takes you around the crater’s Mall Drive.

Duke Kahanamoku Statue – A Tribute to A True Hawaiian Legend and Icon
January 24, 2022

See the Treasures of the World at the Honolulu Museum of Art
January 24, 2022