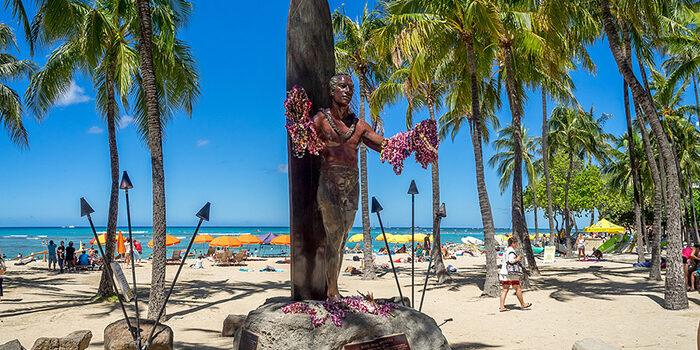 It’s hard to imagine a world without surfing. In fact, surfing has become such a worldwide sport that it appeared for the first time in the 2020 Tokyo Olympic Games. So, what does this have to do with the statue of Duke Kahanamoku located on Kalakaua Avenue, Honolulu, between Waikiki and Kuhio beaches? The answer is everything!

Who was Duke Paoa Kahanamoku?

Duke is the father of surfing and, if it was possible for one person to epitomize Hawaii and its culture, then that is exactly what Duke does and why so many visitors to the islands make a ‘pilgrimage’ to his statue.

Christened Duke (he was not from nobility and nor is it a nickname), from his early years this young native Hawaiian would spend much of his time on the water, swimming and surfing on what was a traditional surfboard he called ‘papa nui’. This was not in the days of glass fiber or composites, his surfboard was 16 foot long, weighed 52 kg, and was made of solid hardwood!

Learning to control such a massive surfboard clearly helped Duke with his fitness and swimming prowess to the point where he represented the United States at the Olympics in 1912 when he won a gold medal for the 100-meter freestyle and a silver in the 4 x 200-meter freestyle relay. With World War 1 seeing the cancellation of the Olympic Games in 1916, it was another four years before he was to win gold medals in the same two events. Finally, in the 1924 Paris Olympic Games, at the age of 34 Duke won a silver medal in the 100-meter freestyle, with his brother Samuel taking the bronze medal. The winner of that race was a name you may recognize, Johnny Weissmuller who also found fame later on in life playing Tarzan in the old black and white movies, his distinctive ululating jungle cry being the stuff of legend!

Duke Kahanamoku introduced surfing to the rest of the world

Ask anyone what sport or pastime they would most associate with Hawaii, and it is likely surfing would be the reply. Ask anyone what watersports they associate Australians with, or Californians, and they will most likely say surfing. Well, remarkably, Duke Kahanamoku is responsible for the growth in popularity of the sport in all three locations, and beyond. In the summer of 1912 Duke spent most of his time introducing Californians to the wonders of surfing, while his surfing exhibition in December 1914 at Freshwater Beach in Sydney is seen as a seminal event when it comes to the popularity of surfing in Australia.

The word ‘kahuna’ in Hawaiian means ‘an expert’, and clearly there was no limit to the greatness of this man as, while living at Newport Beach in California in June 1925 a fishing vessel capsized while trying to enter the harbour in heavy seas. Duke, grabbed his surfboard and made multiple trips between the shore and the capsized vessel, rescuing several fishermen. His efforts at the time were described as: “The most superhuman surfboard rescue act the world has ever seen” by the Newport Beach Police Chief. Subsequent to the well-publicized rescue, lifeguards across the U.S. began using surfboards for open-water beach rescues. His heroics more than likely helped contribute to Duke being given the nickname ‘Big Kahuna’!

The Duke Kahanamoku Statue in Hawaii

Now you know a little more about the man who was ‘larger than life’, perhaps you can understand why visiting the eye-catching statue of Duke is one of the most popular excursions on the ‘to do’ list of anyone visiting Hawaii. However, there is more to this statue than meets the eye when you see it for the first time. The statue is nine feet high and cast in solid bronze, and behind the world-famous man is an equally impressive bronze surfboard – well no statue of the man would be complete without a surfboard, would it? The statue was created by Jan Gordon Fisher, an artist and professor from California, and was erected in 1990, Duke’s arms depicting a ‘welcome to Hawaii’ pose. There are also commemorative statues of Duke in Freshwater, Australia; Christchurch, New Zealand; and Huntington Beach California, such was his popularity.

See the Treasures of the World at the Honolulu Museum of Art
January 24, 2022